A place for pics and tutorials on making Soft Kit (clothing and accessories like buckles and cloak pins).

It was suggested that I post some pictures of the cloak I made, and I figured here was the place to do so: 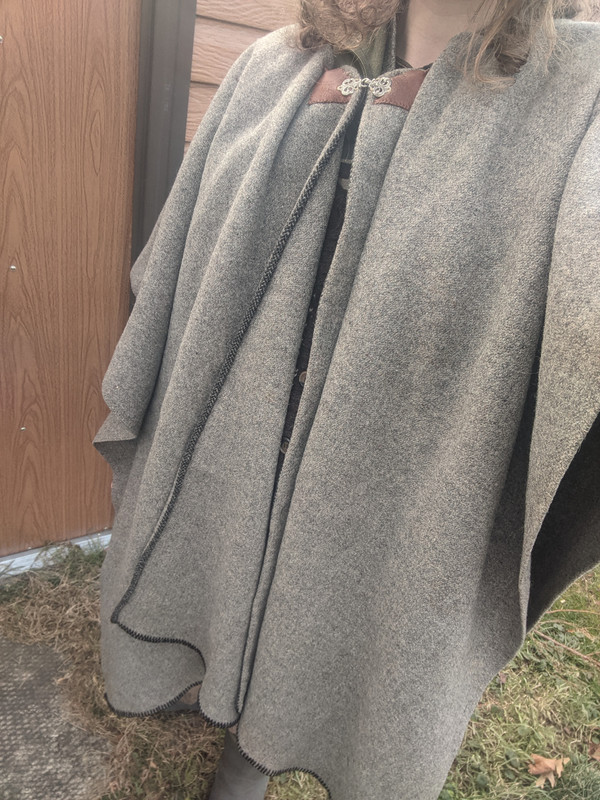 Opened up it has an almost coatlike feel 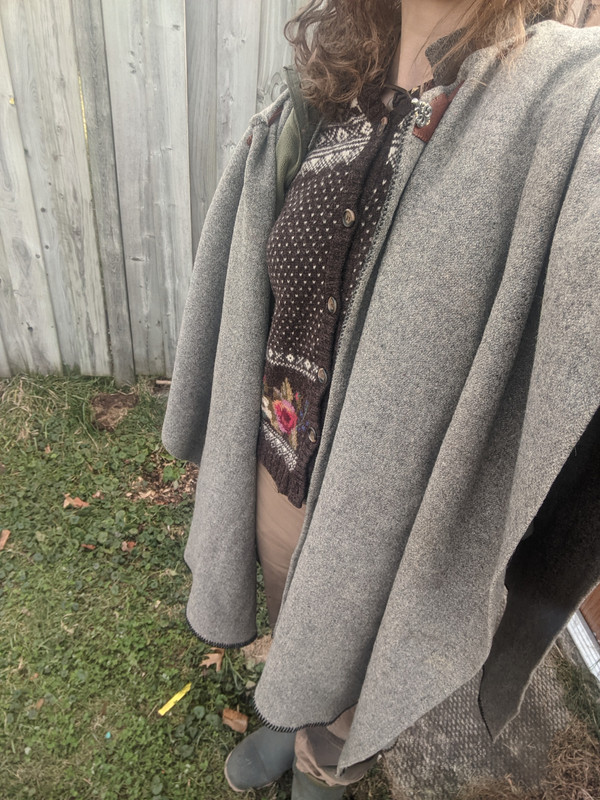 Detail on the clasp 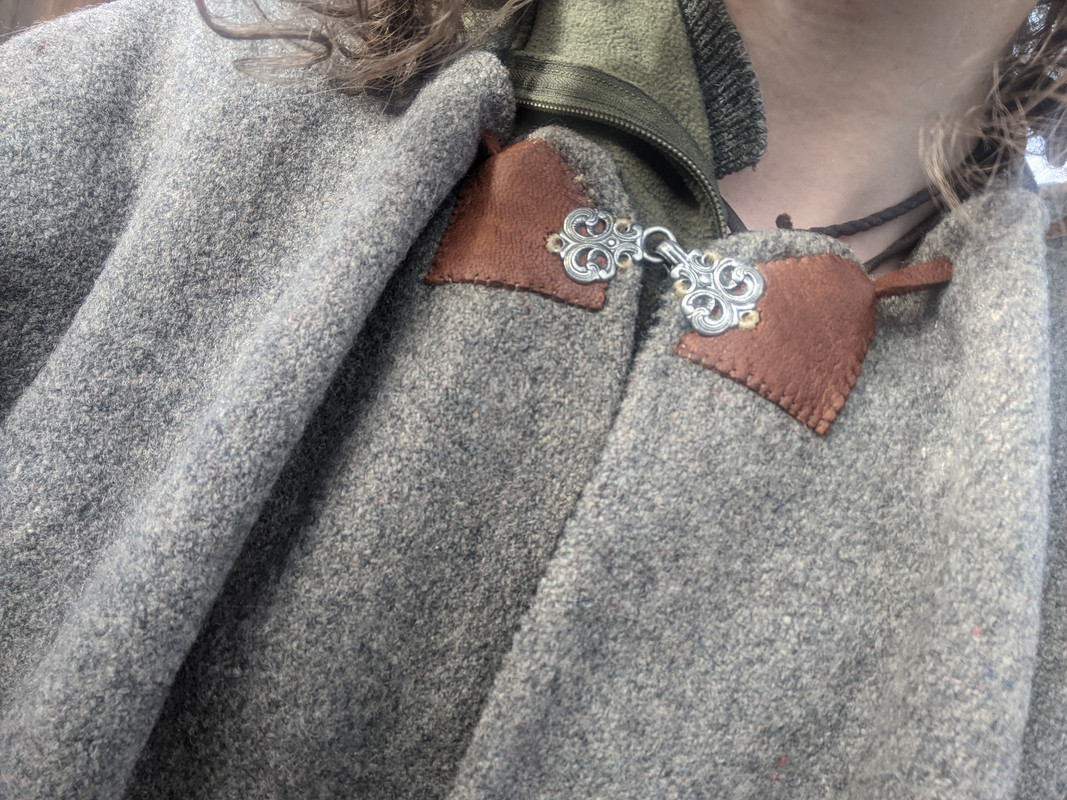 It was made from a 100% wool blanket that I honestly don't like much as a blanket because it's thin but very dense. Cut a slit up the middle in landscape, cut a neck hole, etc. I wonder if it's worth lanolizing, or if I should keep it as breathable as possible? 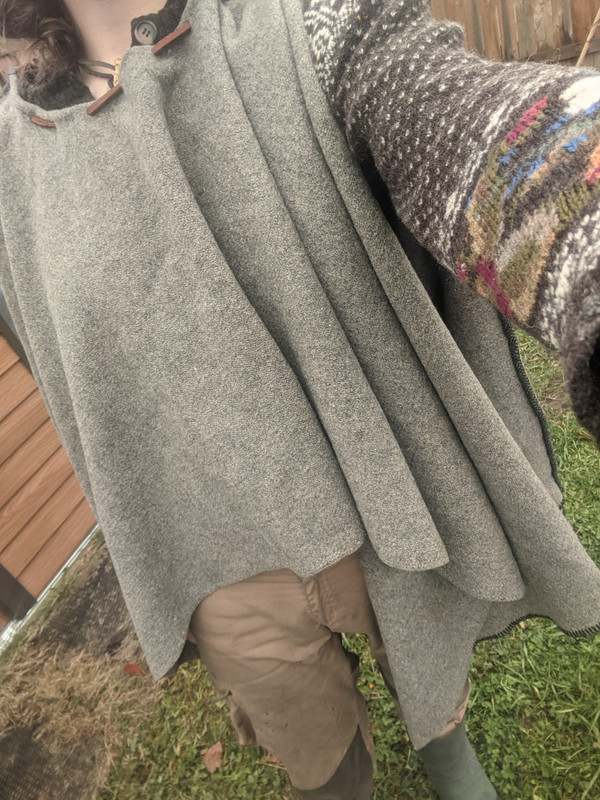 I think I would only wear it like this if I needed one arm totally free for something - for shooting a bow it works perfectly well 'poncho style', both arms have enough freedom as is. In combat I wouldn't want a cloak on period except maybe wrapped around my off hand

It can even be pinned up in the bocksten configuration 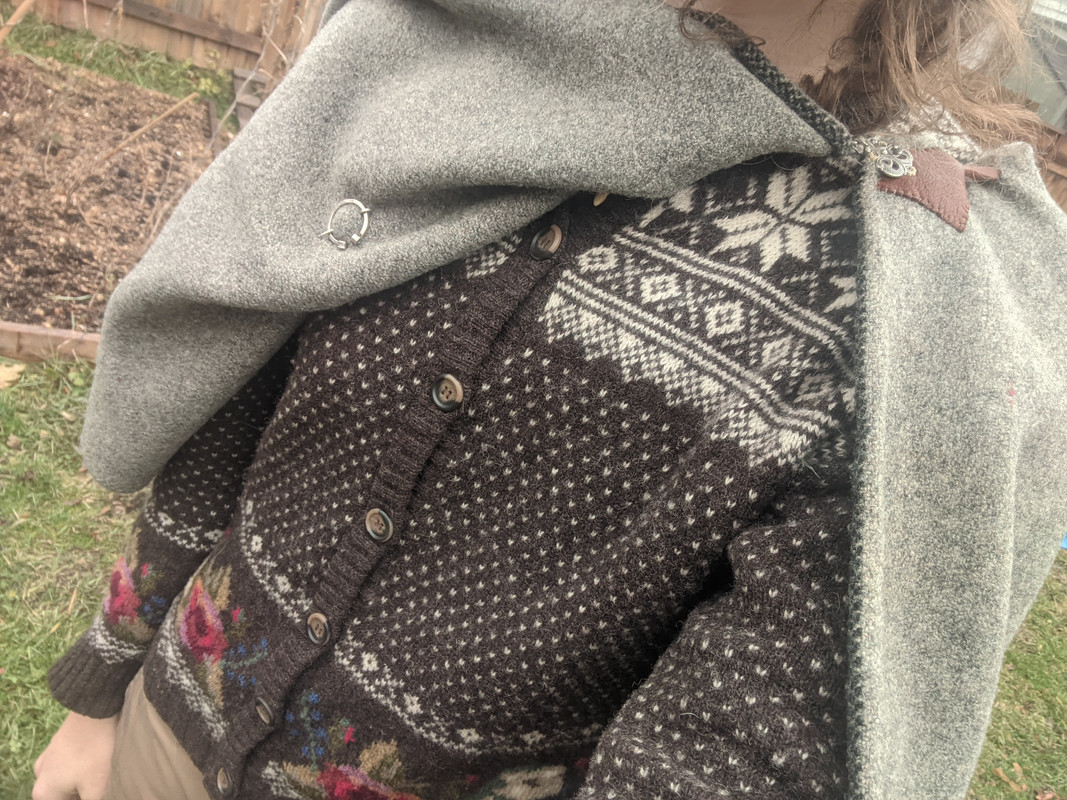 Though I probably wouldn't do this much because it's easier and more comfortable to keep the clasp in front, throw the tails crosswise over each shoulder, and then pin it like this 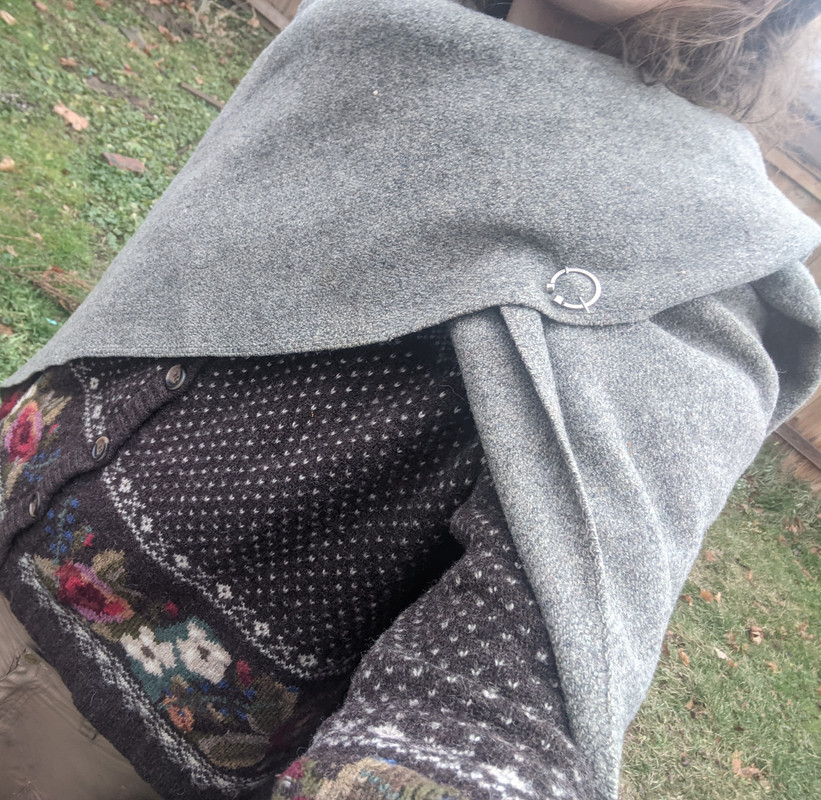 I am going to make a seperate (green) hood, I think, from the same wool as my future short kirtle
Top

That looks very nice! Fits in well with the descriptions we have.

Little hard to tell from these angles, but it looks like the length is short enough to be utilitarian around the homestead as much as out in the bush...cool!

The neckline looks like it has a leather 'drawstring' of a sort running through it...have you found that it has a tendency to slide on this and bunch up somewhere like a shower curtain, or have you done something to prevent this? Nice design!
Now the sword shall come from under the cloak.
Top

It bunches up slightly at the front and then stays put - I haven't noticed it as an issue so far (about a week) once I got the level of gathering/length of the thong right (I played around with it), and I think that's due to the high friction between the thong and the wool

It's there because I initially cut the neck hole too large - it sat just slightly too far out on my shoulders and down on my back to feel well-supported and I had to find a way to fix it. This also pulls the folds slightly more in to the body in a way which makes the front hang shut very well, so while I probably wouldn't do it again if I made another, I'm happy with how this one turned out

It comes down to about a few inches my knee at its longest!
Top

Thatâ€™s beautiful! I really love that â€œruanaâ€ style of a big rectangle with a split. Iâ€™ve got a similarly designed gray cloak myself and itâ€™s one of the most versatile pieces of garb I have ever owned.
Top

That looks great! I really like the leather pieces at the clasp - I assume they are there are reinforcement, but they also add a little visual interest. The front-pieces-crossed-and-pinned-back style of wear always looks very cool with this style of cloak!


Sorrel wrote:It's there because I initially cut the neck hole too large - it sat just slightly too far out on my shoulders and down on my back to feel well-supported and I had to find a way to fix it. This also pulls the folds slightly more in to the body in a way which makes the front hang shut very well, so while I probably wouldn't do it again if I made another, I'm happy with how this one turned out

Neck holes are always a pain; they're so easy to cut too large, and so hard to fix! That's a very clever workaround, though!


Sorrel wrote:I wonder if it's worth lanolizing, or if I should keep it as breathable as possible?

I haven't noticed a big decrease in breathability when I lanolize my wool, but I don't know that I've really concentrated on comparing before and after. I treat my woolens by adding a little bit of lanolin (I use the liquid lanolin that is sold to help protect chafed skin) to water and then soaking the wool in the water. I think to seal up the fibers enough to severely affect breathability, you'd have to make the thing almost unbearable greasy. I personally would say go for it! It should make the wool a little more pleasant to handle and a little more water resistant, and it's easy enough to open a cloak a bit if you need a little more air flow!
- Ned Houndswood, Breelander
Richmond Fantasy-Inspired Hiking and Camping (on WordPress and Facebook)
Top

My favourite thing about it, is that I can keep my hands under the cloak and just poke out through the slit the bowl and stem of my pipe, which has so far kept me from needing to use gloves so far this winter (the primary benefit of this is of course so I can use my phone, but free and warm hands are incredibly useful in the wild as well!
Top

nice work, and that clasp really looks the part
Gimli: It's true you don't see many Dwarf-women. And in fact, they are so alike in voice and appearance, that they are often mistaken for Dwarf-men.
Aragorn: It's the beards.
Top

Very nicely done! I'll always be a fan of the crossed over at the shoulders style of cloaks because it just looks so nice and yours has the additional benefits of being able to be worn in multiple ways!
Persona : Cimrandir - late 3rd Age Dunedain
Top
Post Reply
9 posts • Page 1 of 1